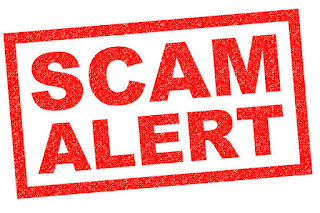 A resident has warned others of a scam she narrowly avoided.

Received a call from Crime Awareness UK who said they were in the area for next couple of days.  They were something like ‘safer neighbourhood’ and were calling on people to install a system.  At first I thought it was police notifying us that they were in the area and teaching us track and trace.  The lady said they would be carrying police authorisation when they arrived.  They would need to see equipment that we have, which I took to mean mobiles, phones and laptops, etc.  The lady wanted to make an appointment for them to call.  I asked if that means they wanted to come in, but she said the appointment could be in the garden.  Bob was not going to be here for the day they were suggesting and, as I was suspicious, I passed her over to Bob to get his view.  He was told that they would need to see burglar alarms, detectors, etc.  He was given a case number.  Each time Bob mentioned the police the lady seemed to back off a bit.  It was left that someone would call back to make an appointment for the following day.

I didn’t have anyone’s name and, unfortunately, the phone number didn’t show on our phone due to a BT upgrade, but someone has since called back to make the appointment.  I told them my Husband was out and they gave me a number to ring to make the appointment, but I won’t speak to them again now that we have that information.

We then tried to get Neighbourhood Watch, without success, so called 101.  The lady there made a report, told me to have nothing more to do with Crime Awareness UK by phone or at the door and to keep doors locked.  She then passed me to Action Fraud, who also made a report.

Out of interest, I was told by Action Fraud that you can check telephone numbers to see if they have been reported as scam numbers at:-

who-called.co.uk.  This website also tells you some details about the calls.

This site is powered by the